A very broad understanding of Relativity is that Point of View depends on Point of Viewing. It is more complicated than that, but it does explain how we interpret things.

Travelling to Kashmir for work, was always normal and it felt the same this time. The trip was planned in detail, the daily schedule was aligned, contingencies were appreciated and I collected as much data as I could on the intended places of visit & had questions ready. Out on the first flight of the day, the window seat too supported the old routine of terrain analysis & searching for familiar areas from above. Change hit while traversing the Srinagar terminal since now, as someone out of uniform, appreciation of normalcy took centre stage. I had last flown out of SXR in 2016 and security at the airport was more than at any other place. This time, the place still felt secure, yet the security was not visible.

On the drive to the city, one saw new cafes, retail outlets, malls & of course, traffic. Suddenly the comparison with other state capitals that I had recently visited brought out the positives of development being afforded to citizens. Though tagged along were the issues of rapid urbanization, guess that is universal.

Day 1 afternoon the agenda was visiting a business site in Badgam about 25 km away. I last remembered the place as a semi-rural community which we had crossed in a heavily armed convoy. This time, a newly launched store was giving people the opportunity of experiencing organized retail. Out of habit, work started with a structured set of briefings loaded with questions. As we progressed from the ground to the second floor & professional matters covered, the focus shifted to digging deeper into the feel of the store. I am still learning the trade, but I strongly feel that retail is more about people than merchandise.

The people echoed a sense of pride & ownership. They were all keen to learn. The team was cohesive & discussions were targeted at becoming better. Dashboards aside, it was evident that the place was in good hands. The best proof came from customers I saw, who came with curious eyes & checked out with bags of clothes. This was not what I had seen in the last work visit to Kashmir & certainly very different from what was read in mainstream media.

Back in the room, the night was spent answering emails & questioning my belief system. Was Kashmir back to normal? What is normal? Are a few hours of learning this time enough to negate a few years of learning last time?

Day 2 started with breakfast surrounded by Gujarati tourists whose volume was directly proportional to their excitement of feeling cold. It was too early for snow, but Jignes bhai (name changed) was optimistic about Pahalgam and the smiles on the family were telling.

An early start for Anantnag took us through the fog at Pampore. The highway showed exits to places like Tral & Pulwama which were always associated with violence. Again, the drive felt safe but security was hardly visible.

The workplace at Anantnag was again reassuring as the scope for improvement was matched by the willingness for improvement. After a few hours of thrashing processes, the discussion over tea, loaded with milk & sugar (could not hurt the intent of hospitality so just drank it) shifted towards the benefits of more, better-paying jobs that were coming into the valley. Organized businesses were slowly becoming a career option as the elimination of 'Bandhs' meant that people could work & get paid throughout the year. A luxury that was only available to government employees earlier.

It made a special impact when people discussed the security forces without realizing my past in uniform. Two statements stood out; first, a store owner commented that sales to uniformed persons are a substantial part of his turnover and second the hotel guard, who was from Uri, answering as to why there is no security force on the streets said." How can it be normal, if it doesn't look normal?" 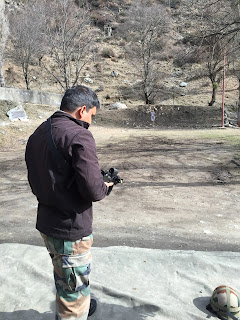 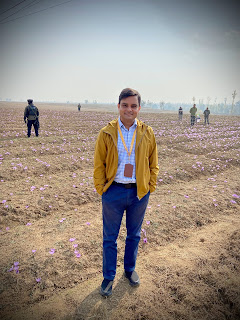 I was even more comfortable on the ride back to the airport with the driver playing Punjabi rap numbers. The saffron plantations & effect of autumn on Chinar trees did make for good sights but as I took off from Kashmir, the question lingered, is 'normal' back?

Once home, I searched for recent analyses on Kashmir. Political, Economic, Military & Social. While they all made sense, their vector sum did not align with the reality I saw on the ground. That is the beauty of truth, it does not need to make sense. People may define their own 'normal', but if I just take the set of people of Kashmir that I met, the aspirational Kashmiri is seeking his/her version of Kashmir. For years they have borne the social costs of economic stagnation & the economic costs of social stagnation. Upliftment now is a human right.

Listening to people discuss growth possibilities in Bandipore, Kupwara & Baramulla was very heartening. In my last experience, just crossing these areas required reconnaissance & planning. After years of turmoil, someone managing the affairs is doing the right things as the major event in the city was an investor summit instead of a procession or call for a strike at Lal Chowk.

One may question whether opening organized retail is more important than say a hospital or a school, but where we stand as a nation, all of the above need parallel processing. The space program needs to co-exist with the food distribution to the poor.

I saw a Kashmir that is breaking the chains of an uncomfortable past. It is aspirational. It does not want to do the same things that were done earlier and it is ready to take control. This time the feel of Kashmir was different. What impressed me more than the beauty of the place was the determination of this generation to build a better future.

A very broad understanding of Relativity is that Point of View depends on Point of Viewing. It is more complicated than that, but it do...